My Brief Wondrous Career as a Soccer Dad 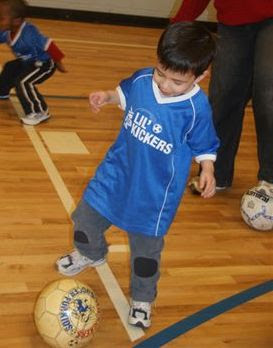 Spot clearly didn't want to be in soccer class. How could I tell? There he was, in the middle of the basketball court, crouched in turtle position with his face pressed against the floorboards as the phalanx of toddlers drove their soccer balls from one end of the gym to the other. This was a stunning, daring act of civil disobedience against the unwanted enforcement of our weekly athletics programming.

Yet it was hardly the first time Spot had protested in soccer class. It was only the most spectacular such collapse. I was confident that, as in previous crises, with a little cajoling he'd be back on his feet and off among the cones and floppy orange discs littering the floor. But this time Spot was raising the stakes. Coach Jaime swung in from the sidelines and stood protectively over my turtle boy as soccer balls careened around him. It was time for dad to intervene.

I approached Spot's successful participation in soccer class as a natural scientist might approach the outcome of a laboratory experiment. If I could control key variables in advance, I could guarantee the desired result in such a way that it could be replicated every Saturday morning at 10:30AM. It was simply a matter of setting the proper controls before plugging in the box. Did I administer the mid-morning fuel booster? Check. Had I drained the bladder? Check. Did I deliver an adequate pre-class pep talk? Check. Were the sneakers on both feet with shoelaces not too tight? Check.

So, if all went well, I would soon be jumping up and down on the sidelines as Spot managed to keep his focus and dribble the ball across the court and into the goal, much as I might were I warming up the giant magnets of an underground particle accelerator and high-fiving my lab assistants as we successfully smashed tiny bits of matter into their component quarks, bosons, and perhaps even a hadron or two.

But that wasn't happening, and Spot was deploying every possible subterfuge to sabotage the enterprise. Collapse #1 was a bogus potty alarm. Back from our unproductive run to the washroom and on the sidelines again, Collapse #2 followed with a demand for "banana." Banana peeled and in hand, Spot wandered back onto the court kicking randomly with one leg at balls that may or may not have been there, turning in ever larger, ever more meaningless circles.

Despite following every protocol and controlling for every variable, despite jerry-rigging the apparatus with a banana, this experiment was a failure. There were no quarks or Higgs bosons at the end of this accelerator. I failed to see the hand of God in the soapy tracks of my bubble chamber. No quarks or bosons, just randomly colliding soccer balls, just noise and a single rogue toddler with his banana gyrating through statistically improbable cycles of leg twitching glory.

It was at this moment that my Inner Hockey Dad awoke from its evolutionary slumber deep in the most primitive parts of my brain. This cold-blooded amphibian, this vestigial holdover from an earlier stage of male evolutionary development, lifted itself onto all four legs, swung its armor-plated tail against the more evolved portions of my consciousness, and bellowed:

"Kick the FUCKING BALL you fucking LOSER! Fucking A! Get your ASS off the FLOOR and K.I.C.K. the B.A.L.L!"

Now, although this crude commentary never made it out of my mouth, it nonetheless highlighted how invested I had become in Spot's performance. This was a surprise. It all began so simply: I saw a sign at the neighborhood club last spring, I signed him up, and all seemed to go well. He loved being surrounded by balls, endless piles of balls rolling everywhere, and running back and forth from one net to the other with other yelping toddlers. What joy!

Caught up in the enthusiasm, I joined an adult pick-up league, playing real soccer with real rules for the first time in my life, and loving it as much as my son. I endured one crippling injury after another, as well as the frustration -- as raw for a 40 year old man as for a teenager -- of not getting enough ball time. I took the ball to the park in the twilight of September evenings and dribbled endless figure eight's while Spot picked berries from nearby bushes and my dog panted blankly.

But what if he didn't want to kick the ball, and in fact was now much more interested in picking the red berries from that bush and the black berries from this bush? So be it. He has tasted soccer, he has devoted roughly one-fifth of his brief life-span to it, perhaps it is time to sample other things. He can always come back to it, being the nimble, flexible creature that he is. It's his father, accustomed as he has become to projects requiring years of labor, who is not quite so nimble anymore.

Still feeling the effects of my Inner Hockey Dad's amphibian intrusion, I brusquely picked Spot up off the floor and carried him football-style out of the gymnasium and down the window-lined corridor. Away from the sound of bouncing balls and toddler voices, I set him down on his feet and let him run a few steps ahead. His protest was concluded. He had won. A smile returned to his overheated face. It was a sunny day and the rest of the afternoon lay before us.

He looked back at me and motioned me forward. "Not that way, this way," he said, coming back to get me. "I'll hold your hand."

Three years ago, there had been nothing in the space above that empty stretch of linoleum but swirls of dust floating in a ray of sunshine. Now a person stood there, and his small voice ahead of me called me forward. Only a fool would fail to listen.
Posted by chicago pop

Good call! I'm glad my parents didn't make me continue with sports I hated as a kid.

Reptiles, quarks, bananas. It's got everything an essay on parenting should.

Wish I'd written it.