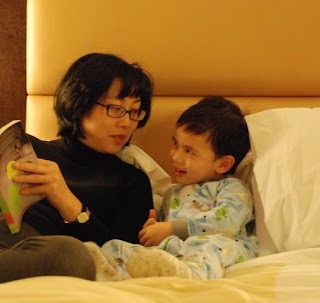 I remember well the day my father said, as he shed the sports section of the paper from his lap and checked the day's barometric pressure on his GPS-wristwatch device, "You want to castrate me."

I don't remember exactly how I replied to this. It's not the kind of question that comes up often enough to have a practiced and ready response. One tactic that occurred to me would be to respond as my now 3-year old son does when his soccer coach asks "Are you a purple dinosaur?" Spot smiles knowingly and in a falling tone says "Nnnnnnnoo ...", meaning Of course I'm not a purple dinosaur, or in my case, Of course I don't want to castrate you.

But I think he meant it. Which made me wonder if I did mean it. So I remember thinking, there in the living room, as the Chicago Bears wasted yet another hour of my father's sports-viewing life, would it really be better if my father were castrated? If he were a docile eunuch who did not interrupt the flow of my existence with his bad jokes repeated as if the reason we didn't laugh was because we didn't hear him the first time? If he didn't disrupt my psychic equilibrium with his Russian peasant house manners, or his tendency to lose important documents and to rely on other people's cell phones for vital communications? And would I really want my mother all to myself?

In spite of all their potency, these questions quickly sank into my deep subconscious, an already crowded place, where they were duly labeled and set aside for consideration by some future psychotherapist.

Until, that is, the day the tables were turned. I descended the staircase one morning to be met by the same Oedipal glare that my father must have known well. In a bath of soft light before me I saw the heartwarming scene of a mother, dressed for work and feeding breakfast to her son, holding a boy in a puppy-covered sleeper with puppy ears flopping off the side of each foot. Yet this boy, shattering the Norman Rockwell charm of the scene, frowns when he sees me, and raises an accusatory, pointed finger into the air.

I grab a glass of orange juice, and sit down across the room. My son repeats his demand. I sense my inner Walter Sobchack dislodging and rising to the surface, the same irritable reflex I often saw in my father long before Walter Sobchak was invented. "Hell no," this Walter Sobchak/father composite might have said, this father who in those moments of lost self control reminded me of -- and may in fact have been distantly related to -- the fabled Jewish gangsters of Odessa.

"No," I say, with a small portion of offense and a larger portion of incredulity. Mom gets up and goes upstairs to get something. Exuding crisis and near hysteria, determined not to share the same breakfast space with Daddy, Spot bounds off of the sofa --"I better go see Mama!" -- and runs upstairs.

For the next several weeks, if I trespassed on the morning feeding -- which was Mama's job according to our division of labor -- I was told to go back upstairs. That never worked, of course, and so being the clever boy he is, Spot began asking that I relocate to the kitchen. Spot's Oedipal instincts didn't stop there, however. It wasn't long before Spot claimed exclusive possession of my in-laws, and not just sovereignty over breakfast, but lunch, too: "Daddy, you go away!"

It was sometime in my 30's when my father shared his Oedipal concern with me; Spot isn't even three yet and he's already working to banish me from breakfast with Mama, and then lunch with Mama's parents. I've always suspected there was a nugget of truth to Freud -- just a nugget -- but now I'm going to hide the cutlery.
Posted by chicago pop