A reader responds to Andrew Sullivan.

Earlier this week, in your post “The Top Ten Reasons Conservatives Should Vote For Obama”, you wrote under Point 4: “A truce in the culture war. Obama takes us past the debilitating boomer warfare that has raged since the 1960s. Nothing has distorted our politics so gravely; nothing has made a rational politics more elusive.”

On the one hand I agree with you; on the other hand, you don't go nearly far enough. An Obama presidency means much more than a truce in the 60’s culture war. It means the end of a much older and more terrible war, in which the 60's was merely one battle: the American Civil War. That is what is at stake here.

The Civil War was fought from Sumter to Appomattox, from April 12, 1861, to April 9, 1865. But the roots of the war predated 1861, and the consequences lived on long after 1865. In reality the Civil War never ended, it just shifted from a military to a culture war - the same culture war that is still going on today....

The 1960’s was part of that larger war, marking the struggle to end Jim Crow, the century-long regime of American apartheid (Vietnam was, in my opinion, related but secondary). The end of apartheid was a second humiliating defeat for the forces of the conservative "South" at the hands of the liberal "North", and it subsequently gave rise to those decades of distorted and irrational politics you so deplore, as the reactionary and fundamentalist forces regrouped and mounted yet another rearguard insurrection against their liberal "oppressors", culminating in their partial ascension to power under Bush...

So let's be clear - it is not "boomer warfare" which has distorted our politics, or made rational politics so elusive since the 60's: it is something far deeper, something far older, something which has been with us from the beginning in this country, and which we in turn brought with us from the Old World; something which in fact traces back to the very origin of humanity - spiritually, psychologically, politically, evolutionarily. That depth is what gives the American story its pathos and its importance. That is why the world watches us: to see if we can work it out - to see if there is hope.

Seems like a stretch? Check out these three maps.

This one represents the pattern of support for McCain (red) and Obama (blue): 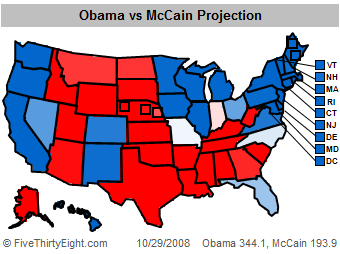 Compare that to a map of the two sides of the American Civil War: 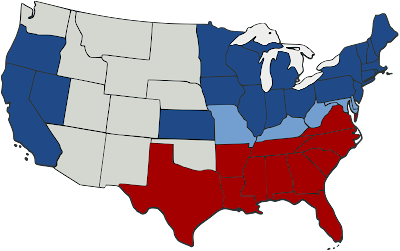 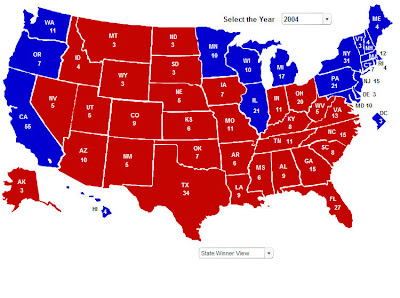