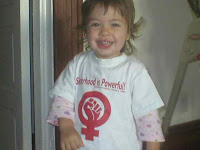 I just finished a long essay for Public Eye magazine on the ideal and reality of Christian Right childrearing, which will be published sometime in the next month. I discovered that while Christian Right parenting ideals--primarily about the supremacy of fathers, subordination of mothers, and inborn wickedness of children--are simple and often frightening, the actual behavior of conservative evangelicals is pretty complex.

As I write in the article, conservative evangelical homes must confront the same problems as their nonevangelical counterparts: the erosion of real wages, the rising costs of necessities like health care and education, the ubiquity of electronic media, and the declining rights of workers, to name a few. This explains why, for example, rates of teen sex and divorce are not significantly lower in these homes. In fact, divorce is especially high in Bible Belt states, due at least in part to higher unemployment.

In an interview, the sociologist W. Bradford Wilcox, who studies the impact of conservative evangelical faith on the behavior of both men and women, urged that I distinguish “between what elite evangelicals [like James Dobson] say and what average people are doing.” While elites may rail against the social and economic changes of recent decades, Wilcox said that “your average evangelical takes all that with a grain of salt.” That’s in part because most evangelical wives work. “Part of that is a class issue,” Wilcox said. “Evangelicals are more working class, than, for example, mainline Protestants, [and] they have less economic flexibility. And so the reality on the ground, with gender issues, is more flexible than some might expect.”

I immediately thought of Wilcox's point when I stumbled across this recent broadcast transcript from right-wing blowhard Rush Limbaugh. In it, Rush grumbles against fathers cooking for their families and parents buying toy kitchens for boys. "This is not men reshaping and rethinking their roles," says Rush. "That's being done for them with various sorts of pressure being applied if the behavioral model that is demanded isn't met"--and the pressure, he says, is coming from "feminazis."

This is all par for the course, and not really worthy of comment. But then the calls start coming in from listeners. Here's the first:

RUSH: To the phones, to Fort Wayne, Indiana. This is Steve. Nice to have you on the program, sir.

CALLER: I'm a stay-at-home dad. I run a small business out of my home, and my boys -- I got two boys -- are great cooks. Now, I haven't bought 'em a kitchen set, and it's not on my short list of toys to buy, but they can make a mean batch of cookies, but they're in wrestling, and they'll kick somebody's tail with a sword -- playing swords with them -- and I wouldn't have a problem with them cooking at all. That's not a... I cook every meal in our house.

RUSH: How old did you say that these two boys are?

CALLER: My boys are eight and five.

CALLER: They do. They buy a brand-name mixer and...

And so on. As he listens, Rush is obviously confused. It's hilarious, ironic--and a perfect illustration of Wilcox's research. It's also a measure of the degree to which conservative ideologues are being left in the dust by their followers--who must, after all, live in the same 21st century as the rest of us.
Posted by Jeremy Adam Smith

Mega dittos? That dialogue is absolutely hilarious -- are you sure you're not pulling our leg(s)? I couldn't think of a funnier way to spoof Limbaugh if I tried. I'm speechless. Fascinating.

I promise that every word is authentic. You can't make up shit like this--you have to google it!

I thought at first that his point was that cooking is for sissies, but then it seemed to be that pretend play is dumb. It became clear, though, that he didn't actually have a point. In any event, I cooked us a chard tart for dinner tonight, in a heart-shaped pan.

Now I'm confused - why does Rush have a problem with men cooking? In Europe, most of the top cooking show hosts are men. (Oh, forget I said that - Rush would rag on European men, although there's far more blatant sexism here.)

My own fundy father did most of the cooking and laundry until we kids were able to take over. My ultra-conservative still-husband is a cook and baker extraordinaire. When I moved out, learning to make yeast dough was my first act of domestic emancipation (spelling? in German it takes a z.) so I could make my own Flammekuechen.

My parents both dropped out of very comfortable families to adopt a fully-fundy lifestyle ... which doesn't make sense in Wilcox's scheme. Outliers, maybe.

Ah. I meant specifically the socioeconomic component. I'd understood you to be saying Wilcox saw a correlation between class and religious fervor, and I made the jump to imagining a possible causal relationship. In my parents' case, it seemed that they followed escapist faith down a few notches, rather than fundamentalism giving sense to a life that was always working-class.

Everyone's application of doctrine is selective, though. I did heavy logging with my father from the time I was young, and even back then I felt like I was getting conflicting messages. I had to wear long skirts (be submissive), but was better with a chain saw and operating a skidder than were many men. (why submit to an incompetent oaf?) Oh, no, I have no issues with being "more of a man" than are most men. Absolutely no issues.

Hahaha. That was a great 'call in' to catch. Rush discovering that the world has changed in the last 50 or so years and that now even the 'manly men' spend time raising their sons and baking biscuits. Feminism set the ball rolling by calling for egalatarian parenting but now it has a momentum all its own because they can't blame us for how lovely it actually is to be raising your kids.