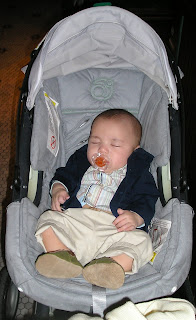 A few weeks ago my wife and I had the crazy idea to schlepp Spot to Lower Manhattan for a good friend's wedding. Spot was a good sport about the whole thing, as usual, asking only that certain minimal physiological requirements be met in exchange for enduring the horrendous inconvenience of air travel and the occasionally horrendous experience of a wedding reception. He slept profoundly through both ceremony and reception, attired in a navy blazer, khaki pants, and a pacifier stuck in his mouth like a cork in a jug.

But the wedding is not the point; the point is that on the way back to Chicago, Spot had his first in-flight poop. It was bound to happen; Spot has been raking up firsts of this sort all along the way, and shows no signs of slowing down. While he doesn't seem to care much for the act of pooping in and of itself, he certainly enjoys the aftermath. He really, really loves it. I can understand the obvious satisfaction of getting cleaned up, and if he's as much of a psychotic neat-freak as his father, then perhaps this is an early manifestation of my legacy. But there's more to it than that. He's into the whole Gestalt. Dropping Spot onto the changing table - or whatever equivalent we've contrived for the moment - is like dosing him with an enormous happy pill. We've had some of our best times there. My wife has had the same experience. Pooping, family, and happiness; how much better (or Freudian) can things get?

Without getting into the probable sources of his pleasure, I know that for me "doing a diaper" has joined the family of certain other elementary procedures, like changing a flat tire, sewing a button, or whipping up a white sauce, that are the mark of a generally competent adult. But beyond that, it's just fun. How could it not be, when Spot gets that giggly smile on his face and then cantilevers his legs into frog position on the changing-table, all while the seat-belt sign is blinking and the turbulence gets nasty? "Come on old man," he's saying to me, "let's see you get that diaper on me this time!" I'm the one who freaks out, he just enjoys the show.

I managed to keep Spot from sliding into either the sink or the toilet, and one day he'll thank me for this, but as I picked him up I bumped his head against the curved bulkhead and this he refused to tolerate. Fortunately, the jet engines were handy and did a fine job of muffling the wails, allowing us to return to our seats just a few minutes later with no one the wiser.

"How'd it go?" asked the guy next to me, an affable MBA with all sorts of interesting things to say about affordable housing in New York. I told him how I bumped Spot on the curved bulkhead and he lit up with a boyish smile. "That's what I'll tell my wife," he said, with what my own father would describe as a shit-eating grin. "I'm too tall, I can't change the diaper in-flight because I can't do all that in the airplane restroom." He seemed satisfied, like he had found something he had been looking for. I have no doubt that this fellow had changed his fair share of diapers, but he seemed to also know that he was expected not to like it, and not to want to do it, because he was a man, and that if he found just the right excuse, the world would let him off the hook.

The diaper thing seems to run pretty deep, and I have a feeling that it lies at the root of our gendered conceptions of labor. Women handle small dependent things. Men control big impersonal things. Women are closer to the raw, men to the cooked. Or so it goes. Personally, I don't quite get it when our babysitter tells us that "most men don't like to change diapers," something that's been repeated to me over and over again, mostly by women, who are in a position to know. Since most men, I assume, understand the importance of consistently wiping their own asses, I'm not sure what accounts for the hesitation to wipe someone else's, especially that of one's offspring.

My wife recently shared a statistic with me, which I can't source but I'm sure the readers of this blog can, indicating that among adult caregivers of elderly parents, 38% are daughters, while only 7% are sons. If diapering represents an aversion to infant dependency, this statistic suggests that the aversion reemerges in the presence of elderly dependency at the far end of life's trajectory. Caregiving is feminized, whether it be for the young, the old, the sick or anyone else.

But culture is full of contradictions and capable of endless permutations. Diapering could conceivably go the route of national barrista competitions, where what had once been a menial service operation is transformed into an artisanal skill that is subject to expert appreciation on the basis of speed, technical, and artistic merit. Had such a panel of judges viewed my in-flight performance, I'm sure I would have wilted as they raised their placards: 8.5, 7, 6.5. After all, making the baby cry is the equivalent of falling on your rear-end during a triple axel turn in figure skating.
Posted by chicago pop

your story reminds me of one my wife told from her trip to ghana several years ago. she said that in the village near accra where she stayed, the happiest, friendliest person she met, with an unshakably sunny disposition, was the man whose job it was to carry out the latrine cans. when she asked how that could be, i think (if i recall correctly) that someone answered "he knows his job is secure."

I was shocked when I was told that there were men who resist changing diapers. I've never met one, thank god. Most dads I know don't think twice about it. But I have met moms (online and in-person) who described their husbands "retching" at a poopy diaper, poor dears, who were thereafter excused from the task. I frankly think that these guys are losers and wimps.

haven't had a repeat of this type of thing in a while now, I suspect less because I'm any less clumsy, than because Spot's head is getting thicker.

I share Jeremy's befuddlement at diaper aversion. Seems to go with general male aversion to infants, period. Once they can act more like "little men" -- and not need to be carried, fed, or helped to poop -- the problem seems to go away, somewhat.

I'm pretty new to the whole fatherhood thing, but I've been pleasantly surprised at how easy it's been to re-conceptualize all sorts of stereotypically feminine tasks in moderately macho terms.

Diapering, burping, getting my daughter off to sleep, being gentle and patient with her when she's fussy, figuring out how to soothe her, etc. -- they're all tasks that require a lot of competence and confidence. What's more manly than being competent and confident?

I think you're absolutely right, Daniel. Your comment made me think of an incident from my personal life, this past weekend: I was on a beach outing with another dad and his son. When our boys got sleepy, they got irritable, but after no little bit of struggle we got them both sleeping side by side in the tent. Afterwards, the dad and I gleefully acted like we had just scored a winning goals, high-fiving, pumping our fists, etc. Then, of course, we had a peaceful hour of just sitting around on the beach, reading beach novels and chit-chatting.

I never get why some men (not the one I live with fortunately) think it's ok to see a babycare task (or a housework task or whatever) that doesn't require any particular physical attribute (like breastfeeding obviously does) and yet think it's ok to say 'I just don't do that'. They would, I'm sure, be appalled at the sight of a child with a nappy that had been left unchanged for days, they would quite rightly see that as neglect, but they don't conceive of that neglect as having been perpetrated by the father. They see any babycare that father's do as a bonus, or a favour, to the mother, whose job it really is.

The obvious response to that, or for that matter a sink full of dishes, is 'you're an adult, you live here, so it's your job.' It's my job too, but it's not exclusively mine. Because, you know, I don't really enjoy it either, I just don't think I have anyone to palm it off on.

A man who changes diapers? That can only be a dream. I feel like I'll be lucky if I find a man who will play with it for a few hours while I make dinner.

You are all probably and highly liberal educated men. I picked such a man myself just because I know how men from my own culture are.

The more educated a man is, the more likely he is to understand the bogus that is gender roles and the less likely he is to say stuff like 'Eww.. that's my wife's job.' I have many family members like that.. it's just VERY ironic. Because at the same time, these women work 40 hr weeks, are busy, and contribute to the finances of the household.

And it's really ridiculous because most women are not like 'OMG.. I don't want to work.. I Just wanna sit around and let me husband support me. Making money is not MY job. I shouldn't have to worry about working!!'