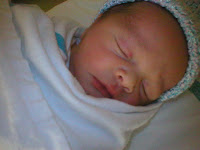 Our son Liko was born at St. Luke's hospital in San Francisco. We were supposed to go to Kaiser, but in the most harrowing sixty minutes of our lives, Liko came out as a double-footling breech in what is technically called a precipitous labor -- that is to say, really, really fast. The closest hospital was St. Luke's in the Mission, where my wife was prepped for an emergency Caesarean. But things moved too quickly: one of Liko's feet was out and he wasn't waiting for surgery.

Doctors aren't usually trained in this kind of vaginal delivery. Fortunately, St. Luke's is one of a handful of hospitals in the city to employ a staff of midwives. The midwife raced into the room. (I was later told she just happened to be nearby.) She reached in and pulled the other leg out. Liko's arms were up around his head, preventing delivery, and so she next reached in and pulled his arms down. Now Liko's face was facing the ceiling and his chin (if memory serves) would have caught on the pubic bone--and so the midwife turned Liko's face toward the floor and Shelly pushed him out.

Everything I described in the previous paragraph happened in a matter of seconds. Literally five minutes later, my wife was alert and energetic, and was able to hold and play with newborn Liko. Afterward she felt only minimal pain. This would not have been the case if she had had a C-section.

St. Luke's merged with California Pacific Medical Center on Jan. 1 of this year, and shortly thereafter stopped scheduling patients who wanted a vaginal birth after having had a C-section, known as a VBAC. There is, in fact, a serious risk associated with VBAC: "a .5 to 1 percent chance of tearing the uterine seam from the previous surgery, causing heavy hemorrhaging and requiring an emergency C-section to save the mother's uterus, her baby, and herself," as the SF Weekly reports. The decision to have a VBAC is not one to be made lightly.

However, "VBAC advocates argue the decision was more about money than safety, since St. Luke's has been successfully delivering post-Caesarean vaginal births for years. Advocates say the move limits a soon-to-be mother's control in one of the most important events of her life — forcing women to choose between a natural birth at home that lacks the safety net of an operating room steps away, or hospitals that may be more likely to urge women to have a repeat C-section, a surgery with more risk of complications and a longer recovery than a vaginal delivery."

Now my friend Karen (whose child is due to be delivered at St. Luke's) tells me that in another cost-cutting measure, a portion of the midwifery section called Homestyle Midwifery that serves low-income women at St. Luke's is being shut down. It's not clear to me what impact the closure will have on St. Luke's ability to serve low-income families or what it means for midwifery at St. Luke's. I don't know if this is part of a reorganization or a genuine cut-back. But with four fewer midwives on staff, I wonder if St. Luke's still has the ability to deal with an emergency like the one we faced.

There will be a protest of the VBAC ban on Friday, May 11, though I know some people will be there to generally rally against St. Luke's moves away from natural childbirth. Participants are asked to meet at the 24th and Mission Bart Station at 10:30 AM and then march to St. Luke's Campus at 11:00 AM. A rally will follow at Dolores Park. With questions or to get more involved, contact charitypc@yahoo.com.

I can't be there, but Shelly and Liko will!
Posted by Jeremy Adam Smith

Well done... wish we could be there, and we will be in spirit.

this health care system is out of control!

My daughter CB was delivered breech, though we knew ahead of time. The doctors were great -- three women who were very supportive, and when the time came, we took a cab to mount sinai hospital and out came cb, butt first... When BK was not yet born, we lived somewhere else, in a smaller town, and it was virtually impossible to find a doctor who would support our midwife's willingness to deliver him if he was breech. He turned at the last moment though so it was moot.