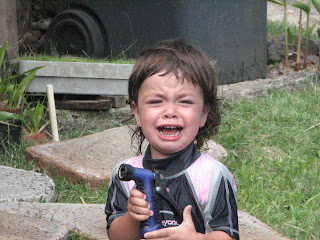 More reasons to feel guilty: a new study says insecure infants are probably screwed for life. "The kid learns, 'I can count on my parents to calm me down,'" says a researcher. "They learn to turn to others. Whereas insecure kids learn that my parent is either rejecting or they learn my parent is neglectful. Or 'I have to protest to get attention.'"

But the upshot of the study has some interesting social implications:

Contrary to the popular American myth that people left to fend for themselves become strong and independent, the psychological research seems to show exactly the opposite is true: It is the people who are confident enough to reach out to others for help -- and to whom help is given -- who become truly capable of independence.

Meanwhile, Robert Sapolsky, professor of biological sciences at Stanford University and of neurology at Stanford's School of Medicine, has some good advice for young men:

For the humans who would like to know what it takes to be an alpha man—if I were 25 and asked that question I would certainly say competitive prowess is important—balls, translated into the more abstractly demanding social realm of humans. What's clear to me now at 45 is, screw the alpha male stuff. Go for an alternative strategy. Go for the social affiliation, build relationships with females, don't waste your time trying to figure out how to be the most adept socially cagy male-male competitor. Amazingly enough that's not what pays off in that system. Go for the affiliative stuff and bypass the male crap. I could not have said that when I was 25.