Flow vs. Its Opposite 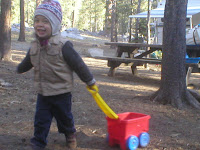 Over at the Greater Good blog (my esteemed employer!), Christine Carter McLaughlin & Kelly Corrigan talk about "flow" and what makes their daughters happy, as part of a series of dialogues on the roots of childhood happiness. To define flow, Christine quotes psychologist Mihaly Csikszentmihalyi:

[A] person in flow is completely focused...Self-consciousness disappears, yet one feels stronger than usual. When a person’s entire being is stretched in the full functioning of body and mind, whatever one does becomes worth doing for its own sake; living becomes its own justification.

I've experienced the state Csikszentmihalyi describes, sometimes for long periods at a time, but when I hit my thirties it happened less and less often--and now that I'm a dad, it's very rare indeed. The irony is that my son Liko seems to spend ninety percent of his life in flow, broken by spasms of inconsolable rage and weepiness. It's as though on his birth my happiness jumped out of me and landed square in his little body, leaving me with only a bit of residue; I can smell it, like resin in a pipe, but there ain't enough to smoke...

I don't write this as an invitation for you to feel sorry for me; it's an empirical fact that most parents of young children feel as I do: self-conscious, enfeebled, unchallenged, displaced. Precisely the opposite of the state Csikszentmihalyi calls flow. "Studies reveal that most married couples start out happy and then become progressively less satisfied over the course of their lives," writes psychologist Daniel Gilbert, "becoming especially disconsolate when their children are in diapers and in adolescence, and returning to their initial levels of happiness only after their children have had the decency to grow up and go away."

Yet most of us, Gilbert notes, will say that our children make us happy--indeed, if you inquired as to my happiness, I would reply that I am, in fact, happy, and that Liko is the poopy, giggling fount of my happiness.

But it's a melancholy, distrait kind of happiness. Yesterday I took him to the merry-go-round. He rode around and around on his horse, up and down, flowing in every sense of the word. I watched his face and I was happy, but it was happiness tinged by a combination of fatigue (I'd been chasing him all day), anxiety (thinking about a looming deadline), and something else that's hard to describe--a feeling of fragility, like this moment couldn't last? More to the point, I was preoccupied with making sure that he didn't fall off the damn horse and break his arm. A moment's inattention, and Liko could be hurt, or worse. It's normal: people who care for little kids are often wracked with moment-to-moment nervousness, and every day we find another gray hair on our heads.

I can feel the reader, especially older parents, rushing to reassure me: it's OK, relax, don't take everything so seriously, get over yourself. It's our American impulse: we don't like to see anyone unhappy, we can't let them just be sad or angry. I share the hypothetical reader's impulse. As we were riding the bus home, Liko asleep in my lap, I looked at the people around me and most of them wore woebegone looks. I wanted them to be happy, for my sake as well as Liko's; who doesn't like to see people smile? It's a noble impulse, but there's also something stupid about it.

Gilbert sets forth three reasons why we insist, against all evidence, that our kids make us happy: 1) kids are, like fine wine or expensive cars, so costly that we actually rationalize their costs and conclude that something so demanding must make us happy; 2) "Memories are dominated by their most powerful--and not their most typical--instances," so that a single "I love you" can wipe out years of sleep deprivation; and 3) "When you have one joy, it's bound to be the greatest"--meaning, because children occlude other sources of pre-child pleasure, such as movies and sex, we demand that our kids give us some degree of happiness, dammit.

This list will doubtless horrify childfree people, and serve as a form of birth control. I think, however, that Gilbert's misses one big one reason why we have children: kids are, to borrow from Chris Hedges, a force that gives us meaning. They structure our lives, create comradeship and community with other parents, and drive us out of bed and into an world of responsibility and interdependence, where, in many ways, our will is not our own. We lose agency and freedom. We gain purpose and wherewithal. The meaning might be illusory, but the brute biology of the situation, and the intrinsic vulnerability of young kids, gives the illusion a massiveness that pushes smaller, weaker illusions aside.

"Our children give us many things," Gilbert writes, "but an increase in our average daily happiness is probably not among them. Rather than deny that fact, we should celebrate it. Our ability to love beyond all measure those who try our patience and weary our bones is at once our most noble and most human quality."

Just so. Here's my point: for adults, happiness is overrated. I'm aware that this opinion puts me in the company of Calvinists and drill sergeants, but I'd pick them over the happiness enforcers any day of the week. Happiness, in my view, is something that happens on the way to something else: not "a skill we can learn," as a colleague once put it, but an evolutionary accident whose pursuit can corrupt us, if we mistake it for an end in itself. "Flow"--that state when "living becomes its own justification"--may well be a kind of happiness unique to childhood, which we shed as we age. Perhaps I am not as able to "go with the flow" as I was when I was younger, but perhaps that is a necessary step towards a deeper kind of happiness.
Posted by Jeremy Adam Smith

great post and point! Happiness really is a superficial momentary thing, while the whole kids thing is about connection, and as you note, meaning.

So yeah, being the parent of a 16 year old (or a 3 year old) with all that this entails means I am not always happy, and often am unhappy, worried, angry, etc. And yes, I do have happy moments. But that's irrelevant. I can't imagine my life without my kids. Because yeah, as you wrote so well, kids give our lives meaning.

Why? Because life is about relationships with other people. And relationships are not about happy. Yeah, okay, sometimes they make you happy. But deep, real relationships also make us mad and angry and crazy too. Does that mean we'd be better off without them? No.

I do think it's really hard to understand how this works if you haven't experienced it. I know that before I had kids I had no idea and couldn't imagine it. But hey, that's life isn't it.

You are exactly right. Gilbert seems to be talking more about "mood" than true happiness, which is a lot less superficial.

Holy Cow!
I'm a stay at home dad, and I'm a fan of Chris Hedges, and I'm a blogger. I'm almost wondering if you and I are the same person? Were we joined, and then split into alternate realities when one of us decided to take a nap and the other one played a video game instead?

I feel exactly the same way as you described. But I always, no matter what, wish I were doing something else.

When my son was born, I felt my happiness leap into him as well. I scoured the web to see if anyone else felt this way, and I came across this poem, which nicely sums it up:

My Son, My Executioner, Donald Hall 1955

My son, my executioner,
I take you in my arms
quiet and small and just astir
and whom my body warms.

Sweet death, small son,
our instrument of immortality,
your cries and hunger
document our bodily decay.

We twenty-five and twenty-two
who seemed to live forever
observe enduring life in you
and start to die together.


Also, If you're interested, I have an essay on my blog that compares Herzog's Grizzly Man to Hedges's War Is A Force That Gives Us Meaning. I think you'll like it.

Sean: Thanks for stopping by, and for the poem, and for the links. I agree we have a lot in common, and hope to hear more from you.

Gilbert-Schmilbert, and yes, I do feel sorry for you. I don't want to make you feel bad, but I have flow experiences every day with my boys (3-1/2 and 4 months). Every day. Multiple.

Maybe I am the weirdo in this regard. My wife is more like you. I've told her on many occasions that I feel sorry for her because she always feels like she's the older, wiser one, and our sons are the young and helpless ones. I feel like that often, but I also often feel like we're peers, experiencing the same moment in the same way. I feel that way when I play bouncy-ball on our front sidewalk with my 3-1/2 year old, or when my four month-old and I are giggling when I'm changing his diaper.

For those moments, and they can last minutes, I forget that they can die at any moment and it feels like we're totally together.

I'm trying not to brag - just to communicate a radically different sentiment than yours.

Is there any trick to feeling flow experiences with kids? Well, I'll take a stab. Fundamentally, enjoy your kids every moment you can! What's more important than that? And forget (at least for moments) about schedules and what you're supposed to do. Take opportunities to drop all thoughts and just have fun. Take 20 minutes to change a diaper and have a tickle session. Take an hour to put your kid to bed one night if you're really having a great time joking around.

I must say, Mike, that your comments come off as a trifle sanctimonious and even oblivious. I suspect our experiences have less to do with our intrinsic virtue than with the burdens we each carry in our lives--and, perhaps, temperament. You shouldn't assume that I don't try to enjoy every moment with my son. If I'm sometimes defeated, it's not for lack of trying.

Sorry for my tone. I guess a good part of my reaction is not to you directly but to a pervasive attitude in our society that children are a burden rather than a blessing. Most people talk about how the advent of walking at one is bad for parents (kids get into trouble!) or that the age of two is a "terrible" age, not about the everyday joys of parenthood.

I also do hope and believe that you can achieve as many or more flow experiences with your children as you did before.

And I, in turn, am reacting to the notion that we must all be happy, happy, happy all the fricking time, and if we're not, then we must be bad parents.

Now that we've got that out of the way, I'll mention that I know all about Playborhood and think it's a grand project, and we'll be mentioning it in the next issue of Greater Good--whose essays will focus on the psychology and sociology of play. If you email me your address at jeremyadamsmith (at) mac.com, I can make sure that you get a copy.

Oh, and I added a link to Playborhood in the "Blogs We Like" section.