"Height of the campaign season" vs. "A very active, engaged co-parent" 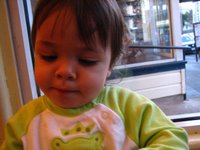 Scenes of parenthood in San Francsico, from my fine neighborhood newspaper, The Noe Valley Voice:

Having a baby is hardly revolutionary, but District 8 Supervisor Bevan Dufty is destined to put his own unique stamp on it.

A gay man, Dufty announced in April that he is partnering with a lesbian friend, Rebecca Goldfader, to create a family. The couple plan to move under the same roof and raise the child together, while remaining open to other relationships.

The response in Noe Valley? Congratulations!

Actually, I found myself snickering at how the happy couple imagine life with baby:

The coming fall will bring not only the birth of Goldfader and Dufty's daughter, but it's also the height of the campaign season. Dufty plans to "campaign hard" for election to a second four-year term as supervisor, but being a good father is his top priority.

Dufty envisions creating a unique and diverse home environment... "I hope our home is like a fun salon, mixing food, politics, and good causes," he says. "I think that will be a great environment to raise our daughter."

Ha ha ha! Good luck on all that, Bevan. See? Straight, gay - it doesn't matter. People are all equally delusional.

Speaking of San Francisco: on Wednesday, May 10, I'll be taking part in a "rapid fire" (three minutes, tops!) reading at Valencia Street Books, along with people like Charlie Anders, Tim Pratt, and Pat Murphy. The event, which starts at 7pm, is a fundraiser for Strange Horizons and the Speculative Literature Foundation, two of my favorite science-fiction related organizations.
Posted by Jeremy Adam Smith

Okay, that part about the fun salon made me crack up uncontrollably!

Sure it's possible, but only with a really big soundproof house and several nannies.