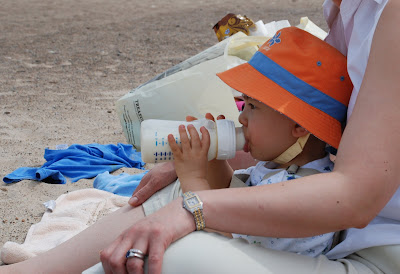 In honor of Father's Day, being a father now, and doing my best to do as my father himself had done, I thought it appropriate to put my family through a sort of major fiasco in the way that only fathers know how to do, generally ensuring, as a result, that whatever form of recreation was attempted during the fiasco is subsequently avoided by all the other family members for the rest of their lives.

So we went to the beach.

The tell-tale warning signs of a fiasco were all there, had I cared to notice them: a few hissed and disparaging remarks about "sand" from Spot's mom; the fact that Spot responded to the sand in the sandbox as if it were a kind of flesh-eating rash that had to be scraped off immediately; and that morning's Weather Channel radar displaying a pastel colored band of tornado-spawning storms, roughly three states wide, bearing due east upon the lower Great Lakes region from somewhere in Nebraska.

It is from volatile conditions such as these that the true family fiasco is made.

So we get to the beach, which is a place we here in the Midwest call The Dunes. Properly speaking, it's not a beach, really, it's much wilder than that, though there are no sharks, and it is interspersed with power plants and steel mills.

If you hit the Dunes on a day when a strong wind is blowing onto the Lake from the shore, which is relatively rare, the effect is one of a sandstorm, a cloud of fine grain that rushes toward the water at up to six inches in elevation. Since Spot himself doesn't rise that much more than six inches in elevation, he wasn't too keen on this phenomenon. So mom sat down with her back to the wind and formed a shelter in which he wailed for the next 45 minutes. 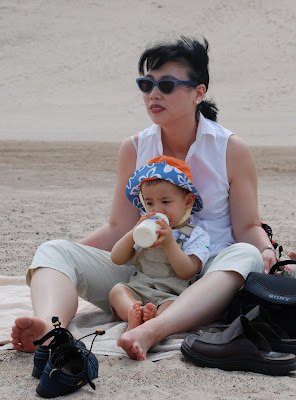 Perhaps a trip to water's edge with Dad might help things? After all, that's what we came for, fun in the water. Up and over to the waves we go, mild waves, but still noisy and much more violent than the ones Spot makes in his bathtub. I can only attempt a crude, but honest, translation of Spot's reaction as we approached them:

motherfuckerstopstopstopmotherfuckerwhatareyoudoingstopthisisbullshitstoooop!
Discouraged, I returned Spot in the shelter of his mom, where he wailed some more in the sandstorm, and the mixture of sunscreen and makeup on my wife's face began to liquefy into a whitish substance with the consistency of Hollandaise sauce. I swam out to the sandbar and back, did this again, and even thought about running down the beach for a few miles.

But I had to check on Spot first. "How's he doing?"

"He's really not enjoying this. I think I'm ready to go."

"You're sure? Some women pay hundreds of dollars to get exfoliated at the spa, you're getting it for free."

"I think it's time to go." That was it. Spot's mom had raised the red buoy. Out of the water.

It is in the nature of The Fiasco -- and it shares this in common with The Wild Goose Chase -- that Dad usually enjoys himself almost to the end, up to a certain point when he realizes that he has alienated absolutely everyone around him, and when he has to admit that reality didn't conform to his fantasy in some way, that maybe Spot won't be the little beach comber companion that he secretly hopes for, maybe he'll be like all the other videodrome joystick babies that won't be able to tell which way is north, or the difference between a maple and an oak tree. Mom is already a lost cause, she hates the beach, we conveniently forgot that fact, and probably will again, but she's never coming back. But Spot?

Indeed, it was. It was getting dark out, a line of heavy gray clouds appeared on the western horizon, and within 30 minutes, the Upper Midwest was sacked with the latest in an unending series of downpours. Visibility on the road fell to 20 or 30 feet. I can only imagine what it was back on the beach. We crawled home along the southern toe of Lake Michigan at 35 miles an hour.

But at least we had an hour on the beach. And just before we left, in the shady picnic area, off the beach and out of the wind, Spot had regained his composure, began circling the picnic table and waving his spoon, erring in widening loops towards the edge of the woods. What was back there, anyway? Surely a curious tot would want to know. Next time, we'll find out. If Spot's mom lets us.
Posted by chicago pop

Ha! Well, you might be cheered to hear that Liko was once terrified of the beach, but today he loves it. The transition happened at around 2 and a half, I'd say, and he really started to love it after he turned three. These days, it's definitely our family's Most Favored Form of Recreation: We go to the beach, throw down our stuff, put Liko in his bathing suit, and let him go crazy for 2-3 hours while we read and make idle chit chat.

Now, Spot's mom--she doesn't sound like she likes the beach too much. Perhaps one day the beach can your special daddy-toddler time, perhaps during the weekday....?

My Dad would have liked you.
My Mom would completely identify with Spot's Mom.

My Dad was an expert at the Fiasco. He would pack all 10 (8 kids) of us into a monstrous old Doge nine passenger van and drive from Cincinnati to Port Huron Ontario for camping trips.

I remember the last one my mother remarked "If we don't get divorced by th end of this trip, it'll be a miracle."

Perhaps one day the beach can your special daddy-toddler time, perhaps during the weekday....?

That's a great idea, and an enticing one. I think you just saved my marriage. "Daddy And Me Beach Day" -- I like it.

Glad to hear that blotz's folks survived multiple fiascos (nothing I ever did quite compares with 10 kids in a van on a road trip southern Ohio to Canada ... at least not with my family) so there is hope for those of us inclined to road-trip boondoggles.