The Next President of the United States 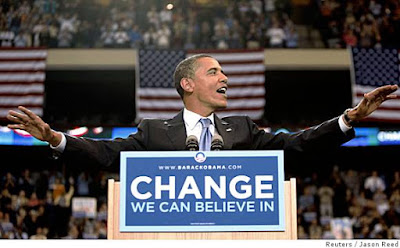 Or at least, I hope so.
Posted by Jeremy Adam Smith

You're not the only one.

Spot's Mama is for Obama.

You were just dying for an excuse to say that, weren't you, Chicago Pop?

Wish I had thought of it first.

Hmmm ... how shall we screw up this "can't possibly lose" scenario this time?

Good question. Could start with the race thing. So far the media is celebrting the story of Obama's nomination as a sort of culmination of the Emancipation Proclamation. While that's part of the story, it glosses over what is just as important, which is that Obama is multi-racial, and that he represents not just the transcendence of white-black lines, but the increasing blurring of multiple racial lines throughout the country altogether -- white, black, asian in Obama's case. The challenging thing about thinking about Obama is that, while it's easy to think of him as "black" and fitting into a certain American narrative of bi-racial politics, in fact it's much more complicated and it becomes clear that that old racist model, which was and in some places is still powerful, just doesn't describe reality for more and more people. Like my son, who is "mixed race," a term I think is archaic and "racist" itself.

I was moderately taken aback that both the NYT and the Chicago Tribune (Obama's home town paper) led off with headlines about the "first black candidate," "black man leads party ticket" etc., when clearly Obama has worked very hard to avoid this kind of identification himself. There's a sort of anachronism to that label, especially when you consider , as Juan Cole points out in a thoughtful post, (Wed. June 4) that at first most whites didn't consider Obama black, and neither did most blacks. That only changed later. Cole uses the term "metro racial" to describe Obama instead, which has more of aa ring of truth for me.

Ezra recognizes every Obama sign and says, "they have a sign like us." We tell him that they are our friends. Believe it our not, in the city of San Francisco, I saw my first McCain sign near Crissy Field. I didn't tell Ezra that they weren't our friends. But, most likely, the people living in a 4 million dollar house near the beach probably wouldn't hang with 2 moms and a boy in a small, run down apt. in Noe Valley. I may be presumptuous, but it's true.

Lostparent: Hee hee. I like the Jedi Knight part.