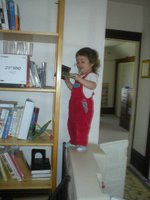 Odds and ends on the Web:

1. ”A different perspective on motherhood,” by Karen Harris: One of my earliest kvetches on “Daddy Dialectic” was that we seldom hear in the mainstream media from moms who work while their men stay home with the kids. Harris’s Mother’s Day op-ed speaks for the go-to-work mom. Nothing groundbreaking or unexpected here; just an honest voice:

My husband has had his fair share of feeling disconnected--the only father at play dates, not included in the preschool-mom chats, asked by the pediatrician for the mother's input when he had all the knowledge of our son's illness.

This hasn't been the easiest of arrangements for me, either. I have the maternal instinct of wanting to be there for my children at all times. I sometimes wonder if I made the right decision. I wonder if I should have been the one there for the first words and the first steps. Instead, they were lovingly re-created for me when I came home from work.

My mother was a stay-at-home mom, as was her mother. They are and were wonderful role models. I have nothing but fond memories of growing up with my mother at home, volunteering at my school, and being part of my every day.

I think about how my sons will remember their father in that way.

2. "The Family as Firing Offense,” by Ruth Marcus: Again, no surprises, but in my opinion you can’t hear enough about how hard it is for blue-collar workers to get the time they need for their kids. Marcus reports on "One Sick Child Away From Being Fired: When Opting Out is Not an Option,” a report authored by Joan C. Williams at the University of California at Hastings:

Williams studied almost 100 union arbitrations that, she writes, "provide a unique window into how work and family responsibilities clash in the lives of bus drivers, telephone workers, construction linemen, nurse's aides, carpenters, welders, janitors and others." Many are mothers, but this is not just a female problem. Divorced fathers, and families that patch together tag-team care, with parents working different shifts, are similarly vulnerable. Indeed, nearly everyone is a potential victim of child-care plans gone awry: Among working-class couples, only 16 percent have families in which one parent is the breadwinner and the other stays home.

The stories Williams relates are foreign to those of us lucky enough to have flexible jobs and understanding bosses -- for whom it's no big deal to step out in the middle of the day to go to the school play. A bus driver is fired when she arrives three minutes late because of her son's asthma attack; a packer loses her job for leaving work because her daughter is in the emergency room with a head injury. A police officer is suspended for failing to report for unscheduled duty; she had arranged baby-sitting for her three children for her regular 4 p.m. shift, but couldn't -- without notice -- find baby-sitting for the noon-to-4 slot she'd been ordered to work.

In my experience, the problem for white-collar workers is that while there is more flexibility, there are fewer boundaries. Yes, you can go out in the middle of the day to deal with a mini-crisis, but you also find yourself obsessing over a spreadsheet at nine in the evening or working through the weekend on a powerpoint.

From same-sex marriage to universal healthcare coverage, Massachusetts has rarely shied away from blazing a trail of progressive reform. Now the state is considering another landmark proposal that would give workers here the nation's most generous paid leave policy.

The bill, which would pay workers their full salary (up to $750 a week) for up to 12 weeks to care for newborns or ill family members, comes just weeks after Republican Gov. Mitt Romney signed legislation that extends health insurance to nearly every state resident.

But the proposal is no liberal anomaly: Twenty-six other states considered some form of paid leave in their 2005 legislative sessions. California's 2004 program is currently the nation's most comprehensive.

Experts say the issue is gaining traction because it attempts to ease the difficulty many Americans face trying to balance work and family. A Harvard University report published in 2004 showed that of 168 countries studied, the United States is one of just five that don't offer some form of paid leave to women in connection with childbirth...

"Both liberals and conservatives recognize the reality of the situation," says Gary Chaison, a professor of labor relations at Clark University in Worcester, Mass. "But they have to make it seem like it is reflecting a new reality, without making it seem like they've become France."

I've lived in Massachusetts. I've traveled in France. There's no chance that anyone is going to mistake Massachusetts for France.

4. ”Being Poor,” by John Scalzi: A bit old now, and much blogged in its day (September 2005!), this is something that I only recently discovered. It’s a catalog of experiences of poverty from a family point of view: powerful stuff. The reader’s comments (350+) are worth a scan.
Posted by Jeremy Adam Smith

All of these hit.

Except the assumptions in Being Poor. All the ones applied to kids are me growing up -- the Community Center Santa, the child support, all of it.

The part that is wrong was the seeing your kids make the same mistakes you did and not really meaning you can be anything, and how hard, neigh on impossible, it is to be anything but poor if you start there.

Yes, it is hard. No, it is not impossible. It takes choices that are smart -- the parents stopping those kids from making the same stupid mistakes, working forward a step at a time to get to a goal. I did it -- welfare kid from a broken home for me and bare bones struggling family farm with too many kids for my husband to professionals with 2 kids in college and a 20+ year marriage.

There were those jobs along the way that would have been lost if days were missed, for my mom and for my husband and me. The years of unusual job and childcare options because they would lead to the next step up towards security and fulfillment and were the smart financial and educational ones.

Poor is not an unchangeable state. People can escape. It is important to give people means to escape it by their own hard work, otherwise it is just more of that humiliating santa.

(I always give to the family support things at Christmas -- church charities, toys for tots, etc -- and my local boys club to support their educational activities. This is important to me because my little brother was too young to know how embarassing that present was but old enough to know he should get something besides one new outfit for church/school and new socks & underwear as presents.)

What you write is certainly true: it is possible to fight your way out of any situation, no matter what the obstacles. Of course, no outcome is ever ordained -- you can lose just as well as win. God knows, it's not hard to spot the losers -- maybe I should say "people who have lost" -- in our society. Of course, just because you see a person at one moment in their lives, perhaps their worst moment, doesn't mean that that moment will last forever.

I think Scalzi knows all that -- I don't know anything about his background, but it seems certain that he started off in the conditions he describes but gradually got out -- today he's a moderately successful writer. "Being Poor" is written from a state of deep subjectivity, closer to a poem or song than an essay or normal blog entry. It doesn't try to be constructive; it just bears witness to a state of mind.

Hey! Very Nice! Check out this website I found where you can make extra cash.
It's not available everywhere, so go to the site and put
in your zipcode to see if you can find something. I found something and make
and extra $900 a month!

A contented out of date majority is the prize of a well-spent youth. As a substitute for of its bringing sad and melancholy prospects of decay, it would give us hopes of eternal stripling in a recovered world.