Mud People vs. The Bush Administration 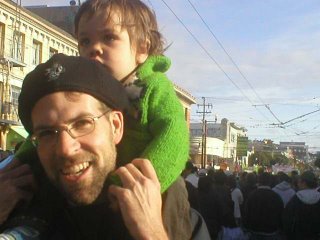 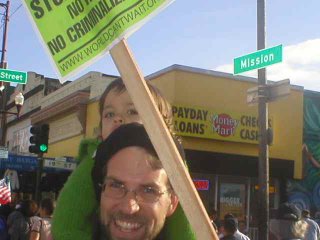 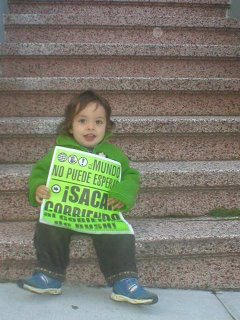 I don't know much about how my ancestors came to the U.S. There are Native American names in my family tree, so some of them came over from Asia during the Ice Age. Many came down from Canada bearing both French and English names. I don't know if they were legal or illegal.

Shelly knows a bit more about her family. Her father's mother's family had households in China and Hawaii, and shuttled back and forth on cruise ships. When the Communists gained power in China, the family divided. Shelly's grandmother stayed in Hawaii and was raised by relatives. Shelly doesn't know much about her father's father's origins. The whole family became citizens when Hawaii became a state in 1959. Shelly's mom's family, meanwhile, is supposedly descended from Peregrine White, born on the Mayflower (" ...it pleased God that Mistriss White was brought a bed of a son, which was called Peregrine." -- Mourt’s Relation, ed. Jordan D. Fiore, Plymouth, Mass: Plymouth Rock Foundation, 1985.)

Our collective, familial memories are fading; we're forgetting that we were once immigrants, driven to the States by politics, economics, unhappiness, yearning. We flutter together like quantum butterflies, every flap of our wings triggering hurricanes in times and places we can't even imagine. How did all these people, bedraggled and confused, traveling from every corner of the earth, come together to form Liko Wai-Kaniela Smith-Doo, my miracle, my hurricane? His name is a trainwreck; so's his bloodline. He's a mutt, my son, a walking, talking Amerieuroasiapacific mashup. I think he's pretty cool.

And this afternoon (I'm starting this late Monday night; will probably post early Tuesday morning) Liko and me and Shelly joined 5,000 other mongrels in marching against...well, who cares? Sure, the Senate wiped out on passing some racist immigration law that would have made illegal status a felony; yes, there was talk at the rally of work permits and legal status for illegal immigrants. There were policy issues at stake, but in many ways, policy wasn't the point.

I don't know about everybody else, but my family was marching for cross-pollination, miscegenation, globalism, cosmopolitanism. We were marching for cities and against the suburbs. My utopia is closer to William Burroughs's Interzone - "the Composite City where all human potentials are spread out in a vast silent market" - than gleaming, seamless, monolithic visions like Plato's Republic or the underground cities of H.G. Wells.

The world is globalizing. Good. But if capital can move across borders so that capitalists can make money, then ordinary working people should be able to do the same. That seems fair, doesn't it? And a world full of Likos wouldn't be a bad place. Si se puede!
Posted by Jeremy Adam Smith

I am more than a little ignorant of our family tree. On my fathers side ( your grandfather) the history goes back quite a way. I have a copy of your great, great, great grandfathers induction as a 33rd degree Mason in New Brunswick Maine I think in 1874. Anyway thats where most of the connections are, Maine that is.They were farmers etc. My impression is that the family kind of linked back and forth between Canada (St, Johns) and northern Maine, mostly Calais ME. In any event they were very early immigrants to the US, probably before the Revolutionary War. Yes, there are family rumors of being related to William Bradford, of Mayflower fame amd the first Governor of the Massachusetts colony. Actually Maine was once northern Massachusetts. I tried doing some family tree research once but with a name like Smith it can get very difficult. I am even less knowlegable about your granmothers side. I do know that they probably came over in the mid 1800's. I know your great grandfather was born here in 1892 and that his father was also born in the US. Nana is not too knowlegable as her father was estranged from his parents so she did not have any real contact with them. I will ask Nana about it later.

For the outside world: I invited family members on both sides to elaborate upon Liko's family tree and our family immigrant stories. That's my Dad, above, sharing what he knows. I'm hoping the Doos, Proulxs, and Deakins will also chime in.

Mom said... I know I great deal of history on my father's side of the family. The family tree goes back to the 1600's where the Proulx's (it was Proul first before Proulx)came from France and every Proulx married another frenchman except one Indian (female) in the 1700's in the Province of Quebec, Canada. My Grandfather, Louis Josseph Proulx came to Lowell, Massachusetts in the early 1900's to work in the mills after his father was killed by a horse. He married my grandmother when he was 21 years old and she 19. My father, Raymond Noel Proulx, born on Christmas Day, was the 13rd child born in a home where only french was spoken. He worked hard before school as a little boy and often felt asleep at his desk. He went to a french school and quit before high school to work in a slaughter house before he went into the army during World War II. A total of 5 brothers were in the armed forces during that time. Unfortunately, the french were considered the uneducated, etc. during for many years which I still find interesting. There were many irish, greek, portuguese, and italians immigrants in Massachusetts. There was a section of Lowell, Massachusetts where my mother grew up called "Little Canada" where everyone spoke French and did not feel comfortable with other nationalities out of fear. This brings me to your grandmother, Nana Smith, whose name was Elizabeth Normandy (very french name) seemed to be ashamed of her name and told me it was the english version until she married a St. Pierre and went back to admitting her father was French. I am only saying this so that you will understand what the good old days really were like. Although Liko is a true Franco American (as we were called) among other things, I hope and pray he is proud of having this wonderful mix of Asian, Irish, French, and English blood. I know I have always been proud of being french and one of Jeremy's teachers told me once that Jeremy insisted he was french even though his name was Jeremy Adam Smith. I spent last weekend in Chicago in a Polish neighborhood and went to Polish restaurants, stores, etc. and there is so many similarities among immigrants it often amazes me. We often say all cultures are all so different for one simple reason: It is easier to deal with the whole group and label them rather than looking at people individually.

I am Suzanne Marie Proulx Wilson, Proulx being my maiden name of course. My father, Joseph Raymond Proulx, was born November 14, 1940 in Westbrook, ME, to Irene Proulx. She gave him up to foster care when he was 18 mo. old, checked back once then moved on. His foster mom, Elizabeth Ann Dowling Field, told my mom all of this. She also said that Joseph's father was in an Italian band. She was a singer in it. After, leaving Joseph in foster care, she went on to marry and have another child. Elizabeth did not know (or didnt' say) who Irene married. There does not appear to be a record of Joseph's birth. I have a global membership at Ancestry.com. I have been doing so much research. The only Irene Proulx I could find was born in the early 1900's. She was in a household where the head was a 44 year old male, and the "wife" was 77. In the record, Irene was 12 or 13. The record said they had emigrated from New Brunswick in 1876 (the year that the man was born). Irene could not have been a product of that union because by my calculations, the woman would have been about 64 when Irene was born. By the time my father was born, Irene would have been about 33. I don't know what to make of that record. By now Irene would probably be dead. The closest I think I came was a man named Elmer Little whose diseased wife was an Irene Proulx, but had no knowledge of her having had a child before marrying him. I didn't pursue that further, because I felt it might make Mr Little feel worse, seeing she had not been dead for very long. My email address is: astrol64@yahoo.com if anyone knows anything.

My thanks to you people for sharing what history you have of your family. Sadly my father's side of the family tree is quite empty :(