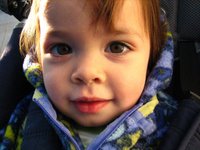 I didn't think much of about my April 4 post when I wrote it; I was just musing. However, the post provoked a number of fascinatingly neurotic discussion threads in the progressive parenting blogosphere.

Many women also seem to have this facination to want their husband's or boyfriends to show their feminine side or turn them into "girly" dads. Sorry but I don't have a feminine side. I'm a frieken [sic] guy! I only have a masculine side...The other day Tina paid me a compliment and said how much she appreciated the way I parent as a DAD. And I told her how much I appreicate the way she parents as a MOM. And then we had sex!

As well as thoughtful disagreement:

I am not a mom, I do not mother. I am a father, and by his [i.e., my] definition, I do father... and more. The ideals he's mentioned are exactly the types of stereotypes that create the awkward looks we get on the playgrounds. It's not an insecurity issue, at least for me. I'm parenting, not mothering. Usually, I'll take the title with a grain of salt, unless its said in a negative tone. Then I tend to take the same defensive stance I would take were someone to call me a slacker for not "working".

But the most substantial dialogue happened over at Half Changed World, where Elizabeth (who objected to some parts of the original post) wrote:

But maybe Jeremy's right in some ways. I write here a fair amount about what I call "reverse traditional families"; families with working mothers and at-home fathers. One of the strains on women in these families is that we rarely give ourselves mothering credit for being breadwinners. We often beat ourselves up for the things that we don't do, without giving ourselves corresponding brownie points for the things we do. Maybe we should stop worrying about whether we're good enough mothers, and decide that we're damned good fathers.

In the various threads, including here on Daddy Dialectic, you can see that we as a culture (assuming you take the threads as representative) are very far from consensus about what mothering and fathering mean.
Posted by Jeremy Adam Smith

When I read your initial post, the "Mr. Mom" comment irked me. I felt you missed the problem with that phrase: it encourages the idea that taking care of one's kid(s) is something that women do, not men.

I raised my son equally with his mother (other than breast feeding) until he was seven and she left for her mother's in the Midwest. After that, it was all me until he left home for college.

I heard "Mr. Mom" far too often – well, once was too often – and I always called the person on it. And that kind of wrong-headedness came from women as well as men: the female friend who thought my changing my son's diaper was "cute" or the many people (male and female) who referred to baby-sitting to describe the time I spent with my son.

Or the definition of child care in a study (2001) by the National Institute on Child Health and Human Development: ''care by anyone other than the child's mother that was routinely scheduled for at least 10 hours per week''

Another thing that bothered me – and still does – is getting kudos for being a single father. Single mothers have been doing the exact same thing and are expected to do it. So I was getting points for doing what a parent is supposed to do.

"Mothering" and "fathering" seem to have the same problem as feminine and masculine: i.e. they are essentially meaningless. Parenting is what people do, regardless of sex. A mother is a female parent; a father is a male parent. Beyond that (and, once again, breast feeding), there is no real difference I've ever seen except for socially-imposed roles.

Bill, thanks for the comment. Some time has passed since I first posted "Dad vs. Mr. Mom," though it served as the basis for an article of mine on Alternet . At the time I was asking myself why the term Mr. Mom didn't bother me on any level, and I was working backwards to figure it out, trying to think out loud and be honest about it.

I'm really not trying to advocate for the widespread application of the term, but just pointing up how truly ambiguous and disruptive the stay-at-home dad is to prevailing gender norms -- "Mr. Mom" is interesting to me only to the degree that it shows multiple gender identities superimposed on each other, concealing masculine in feminine and feminine in masculine. I'm interested in its ironies, not its accuracy.

As to stay-at home dads' disruption quotient I have no disagreement. I discovered, taking my then-baby son to the park, how unwelcome the park mothers made me feel. I got the feeling that they felt proprietary about parenthood; I was not included in the discussions about diapers and sick kids, etc., a;though I wanted to be a part of that.

Thanks for your comments.