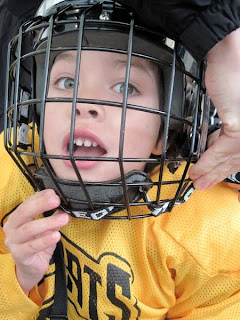 “Keep yer stick on the ice!” yelled a dad, his voice filled with anger.

“Come on, number fifteen!” yelled another. “You skate like a girl!”

Liko and I were watching a youth hockey game at the Yerba Buena rink in San Francisco. We were surrounded by fathers watching their boys play hockey...and, man, was it ugly.

As the kids battled on the ice, you could feel the tension rising among the parents.

Then I heard a lone, small voice from the other side of the bleachers:

I looked up, and so did the other parents.

There stood a fellow on the top bleacher, smiling down at us. The smile said, C’mon, guys, lighten up.

I chuckled, and a ripple of laughter spread through the stands. We did lighten up.

One of the (few) moms yelled, “Have fun keeping your sticks on the ice!”

“Have fun skating like a girl!” shouted a dad.

Dads are way more active in sports than moms; in many communities, it’s the main way that fathers play a role in the lives of their kids and other people’s kids. Indeed, sports are the primary path many boys take to manhood.

That's both a good thing and a problem. It's a good thing because kids get exercise and they learn about discipline, focus, teamwork, and cooperation. It's a bad thing because in today's sports culture, they also learn about misogyny, homophobia, belligerence, self-destructive levels of competition...and the neuroses of their fathers.

"I've seen a lot of hardcore, winning-obsessed, hyper-competitive moms," says Regan McMahon, author of Revolution in the Bleachers: How Parents Can Take Back Family Life in a World Gone Crazy Over Youth Sports

. But fathers, says Regan, can be much worse. "It may be more common for men who have grown up playing sports to have certain opinions about how to be a star, or perhaps they want their child to have the success they had, or if they weren't a star, they want to experience vicariously the stardom they never achieved."

This leads to the kind of angry heckling I saw in the Yerba Buena bleachers; those guys are angry at their younger selves, first and foremost, and at the loss of their youth.

Inwardly, I was cringing: My son has been skating for two and a half years, and we were there so that he could participate in "Give-Hockey-a-Try Day" that afternoon. It's something he wanted, that I had resisted. The thought of my son entering this hockey culture, surrounded by these thuggish men, filled me with an old, sickening disquiet.

I'm not superior to these guys, and I know what Regan is talking about: I often find myself projecting my own athletic anxieties onto my son. I was a decent runner, but in team sports I was mediocre (soccer) to lousy (baseball). I very well remember the shit I got from both teammates and coaches, and I came to dread practices and games. By high school, I had stopped participating, and like millions of other freaks and geeks, I grew to hate sports and jocks. Today, when I see my son trying a sport, my stomach clenches as I watch for signs for failure and weakness.

That's not so different from the dads who stayed with sports, but never achieved as much as they hoped. While individual ability and commitment vary, the ultimate truth about sports is that, by definition, 99 percent of us won't become stars. The best we can hope for is fitness and fun, but too often our sports culture ruins our bodies through overtraining or ruins our self-esteem through bullying and hyper-competitiveness. That culture has shaped me as well as other fathers. 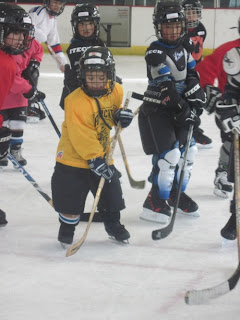 That afternoon, Liko suited up and skated out onto the ice, stick in hand. All the pictures that accompany this blog entry are from that afternoon.

He was the smallest one on the ice, but I watched in awe, truly in awe, as he held his own. I watched him do his best, overcome obstacles, negotiate problems, recover from mistakes, take coaching, handle aggression from other kids, manage his own aggression, and gain new skills. All on his own.

Did this brave, strong boy really grow from the premature newborn who could fit in the palm of my hand? What a miracle. What a gift. I admit it: I was proud.

Again, that's a good thing and a bad thing, that pride.

"The father-son relationship is a delicate one, and boys really don't want to disappoint their dads," says Regan. "And I've seen many boys who seemed to care more about what their dad thought of their performance than their coach. One basketball star I knew would look up in the stands at his dad after every shot, not at his coach. I have heard, anecdotally, about a lot of kids -- boys and girls-- who want to quit a sport or a team but feel they can't because their dad doesn't want them too. That can strain marriages, too, when the dad is gung-ho and the mom isn't." 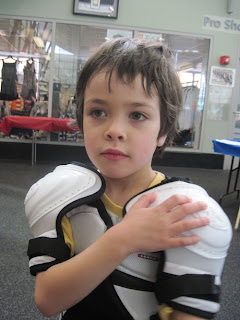 This might be the arena where dads can have the biggest impact in improving and repairing the world. I think about that dad who spoke up in the bleachers: "Have fun!"

It really made a difference, that small action; it took the emotion down a notch. Regan tells me that it's critical for dads to try to "be a voice of sanity in team meetings"--to emphasize the fun, to vote against yet another tournament or extra day of practice.

"Support your child's love of sports, but don't push them," advises Regan. "Keep your ego out of the equation. Keep in mind that your child is playing sports for his or her pleasure, not yours."

That's good advice for individual dads. But the issues go beyond behavior; there's also a policy dimension to the struggle to make youth sports fun again. I'm no expert in this stuff, but Regan is, and so I'll quote her at length:

Putting policies in place to prevent overuse injuries is an important step. One of the best thing to happen in recent years was Little League finally adopting pitch counts to save young pitchers' arms. Dr. James Andrews, the orthopedic surgeon who pioneered the so-called Tommy John surgery for baseball pitchers' elbows, lobbied the national Little League organization for five years before they finally agreed to limit how many balls a kid could throw in a week. Dr. Andrews got tired of seeing injuries in 9-year-olds that he used to see primarily in professional athletes.

I'm an advocate of keeping P.E. a priority in schools, re-establishing intramural sports and encouraging kids to be multi-sport athletes in high school. One of the big changes in youth sports over the past 15 years is that it's gone from being about fun and participation to a star system that weeds out the weaker players and promotes the stronger ones. So recreational leagues are looked down upon and elite travel teams are seen as desirable. Consequently, kids are specalizing early and playing one sport year round, which can cause overuse injuries.

Some states, like Utah, have mandated downtime for interscholastic athletics, so there can be no training or competition for 12 weeks in a given sport. That guarantees that athletes and coaches get a break, and their competition will not gain an edge because they're required to take a break, too. And hey, the kid might get to go on a family vacation or attend a cousin's wedding for a change!

The elite travel teams have gutted high school sports programs to a large extent. So the highly competitive players are missing out on the experience of playing for their schools, because many coaches and parents keep them off the school team because it won't improve their chances for a scholarship and their is a perceived inferiority of play. I think that's a shame.

Interscholatic leagues tend to set their schedules so kids can play multiple sports in a school year, but elite club coaches and parents sometimes discourage their athletes not to participate in school sports. One Bay Area high school I know of actually has a stated policy that kids can only go out for one sport, which I think is kind of shocking. Doing multiple sports is a good way to prevent overuse injuries. So I'd support policies that encourage participation in multiple sports.

In general, I think policy makers should recognize the need for balance in chilren's lives. So any policies that would improve the balance between hard work and free time, sports and and family, commitment to club team and participation in school life, would be beneficial.

This was originally posted to my series for Mothering magazine, "Twenty-Five Ways for Dads to Change the World."
Posted by Jeremy Adam Smith

This is a fantastic post. I look forward to more on this topic as Liko pursues his athletic activities, whatever they may be. When it comes to my own recollections of how I developed a sense of "manhood", the issues you touch on are all absolutely central -- for better and for worse. One of the pleasures of adulthood has been the luxury of not having to dwell on them any more -- i.e., I've "gotten over" the experience of high school PE class -- but they are no less important for that, and worth looking at through the lens of progressive fatherhood.

Wonderful post - my daughter is only 2.5, but my wife is a teacher so we go to a lot of high school sporting events, especially hockey (which I played for a long time). I get really agitated at the parents who just yell for the sake of yelling - yes, that IS as fast as he can skate. He already has two goals and plays defense better than the rest of the team. Lay off.

When I played we had an interesting dynamic - my brother was balls-to-the-wall, wanting to play on the travel team. I was much more this-is-fun, why-not-do-it-again-tomorrow who was contented to sit my turn. He ended up playing travel once I graduated, and excelled, but I was just as happy in the end. Hmm.