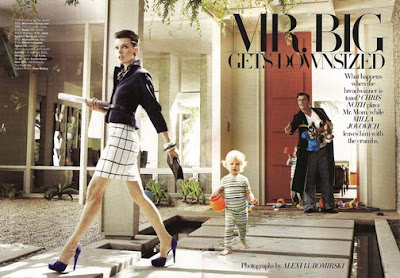 "The subhead of 'Mr. Big Gets Downsized' reads: 'What happens when the breadwinner is toast? Chris Noth plays Mr. Mom, while Milla Jovovich leaves him with the crumbs.' And so begins a role-reversal-ish photo shoot, in which the man is left at home to watch the rugrats while the woman is all business. Just like in The Hangover, it's supposedly instant comedy to see a man with a baby, as though men never parent and are as comfortable with kids as they are with, say, fainting goats."

When Opting Out isn't an Option: "Examining the lives of privileged women and their work-life choices is certainly much sexier and more controversial than telling the stories of the majority of working women in this country. After all, most women must balance work with caregiving. They don't have the option of opting out. Where's the debate in that?"

Helping Breadwinners When It Can't Wait: "In a nation where the vast majority of families now have no one at home to provide care, workers need paid time off from work to care for one another. Our current system of family and medical leave is unpaid, and even that is not inclusive and leaves out many of the hard-working families who need these benefits the most... It is patently unfair for some mothers and fathers to have to take unpaid leave or fear for their jobs to care for a newborn or take care of seriously ill children or parents—or even worse be unable to take that leave because their bosses just say no."

Two Senators Try to Give Working Parents Relief on Child Care Costs: "Under current tax law, many parents can get a tax credit for a portion of their child care costs. The problem is the portion is capped at $3,000. As MomsRising points out today, who pays $3,000 a year for good child care?"

Paternity Leave: "I have to admit, I also felt a little bit insecure about the whole idea of paternity leave. I think there's a lot to the notion that, in our culture, men derive a great deal of psychological satisfaction from going to work every day. Being out and about, running errands, with or without my son, in the middle of day made me feel a little bit strange and somewhat marginal... I'm not particularly proud of that, but there it is."

The next four links are related to the release of my book The Daddy Shift:

The Daddy Identity Crisis: "I wish we as a culture were better at rituals; it would be good to have a ritual of some kind that would mark this passage, from reliance on mom’s body to ramping up dad’s care. As things are in most families, I think it really comes down to Mom, at a certain point, being able to give the baby to her partner and then just… walk away."

Hands On Dads Handle Stress Better: "Job loss is traumatic. So is financial anxiety. But hands-on fathers who can juggle bath-time, playground jaunts and laundry duty are better equipped to deal with those than earlier generations of men, says the author of a new book on fatherhood."

Of fathers, mothers and parenting, and why I choose not to be completely useless: "Fathers are changing the nature of families. I don’t give fathers any particular credit for this. I just maintain that it is true. Fathers are stepping up, and as they do their partners are stepping aside and letting them in. I have watched these changes in my own life and in my own evolution as a father, and in families around me. The change isn’t universal. It is a work in progress."

No Child Left Behind = All Boys Left Behind: "I have great faith that having more men at home can help bring that critical masculine energy back into the nucleus of the family- there may be more sword fighting, squirt guns, and more hours of farting than flash cards. If boys can be empowered by men at home, ideally their ability to perform in school will increase. If more men are paying attention to how their sons are being taught and the obvious deficits they are facing, motivation will occur to take action and address their specific needs."
Posted by Jeremy Adam Smith

Thanks for the mention. We are working hard to ensure that quality affordable childcare/early learning programs are available to all families. Your post here is a great argument for why we need more options for families.