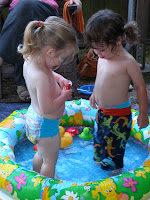 Three links. In all of them, you can see the old world standing side by side with the new:

1. "Workers inventing new types of career models," Chicago Tribune. Describes how young parents of both genders are creating careers paths that permit time off with children. "There's lots of talk these days about finding new career models that no longer force people -- usually women -- to choose between work and family and that provide better transitions back to work for those who take time off," Barbara Rose reports. "The reasons are obvious. The 1950s-era model for success -- a career with no employment gaps and ever-increasing responsibility -- suited a privileged class made up largely of white middle-class males with stay-at-home wives. Today's workforce is far more diverse. Often both spouses work, and younger couples are less willing than their parents to sacrifice family time for careers."

2. "Signs of Détente in the Battle Between Venus and Mars," New York Times. This coverage of a study I've already mentioned twice here at Daddy Dialectic. Sociologists Monahan Lang and Barbara J. Risman "analyzed findings from studies based on national census data, in-depth interviews, and dozens of surveys." They found more similarities than differences in men and women. “The evidence overwhelmingly shows an ongoing shift toward what we call ‘gender convergence,’ an ever-increasing similarity in how men and women live and what they want from their lives,” they write. The Times also reports: "Convergence shows up more in younger parents, said Kathleen Gerson, author of 'Hard Choices: How Women Decide About Work, Career, and Motherhood.' After conducting 120 in-depth interviews with men and women ages 18 to 32, Dr. Gerson found that Generation X fathers spent more time with their children than did baby boomer fathers, and that both sexes aspired to the same ideal: 'a balance between work and family.'"

3. "I made a friend..." Thanks to Google, I ran across this personal blog entry, in which the writer, a stay-at-home mom, meets a stay-at-home dad at the playground:

I'm a happily married woman who will be faithful to Mike til the day he dies (cause I plan on out livin him LOL) but today I met someone and it was like we'd known each other for years! He's a stay at home dad with 3 year old who charlotte got on great with. And where did this amazing encounter take place? At the local park... yeah i know LOL

His son goes to different school to Christine, I declined swapping numbers or emails so there'll be no further contact, but I have to tell you I had an amazing day today. Was like a kid in a play ground LOL It's not often we meet like minded people. If he'd been a woman I think I'd have a new best friend. But he wasn't and well appearances matter, inuendo and the reality is men and women really can't just be friends ...well not in my experience.

This story made me very sad. I once thought that the isolation of stay-at-home dads was either a myth or self-imposed, but the more dads and moms I talk to, the more I realize that it is a real problem for many parents. At a time when families are so diverse and so isolated, it is truly self-destructive to declare certain families out of bounds -- especially when you feel the kind of connection this woman describes.

4. I just published a piece at Mothers Movement Online about friendship between stay-at-home moms and stay-at-home dads--well, it's really about new gender roles and how that shapes the social world of parenting. Here's my personal prescription for negotiating our differences:

I look around at the other parents, moms and dads, and I see my community. I believe in our creativity and resilience, because experience and science tells me that's who we are, and I believe that we will develop new forms and understandings and names that will be every bit as comfortable and familiar to our grandchildren as the nuclear family was to our grandmothers and grandfathers. We're not at a stage where it pays to limit our options. I say we throw open the gates and let everyone in who loves and cares for other human beings, and let's see what happens.

yes, it is sad. i live in a very rural area, a small town in which the pressure to conform to their cookie cutter image is stronger than peer pressure I felt in high school. A connection with anyone would be nice. My husband was a SAHD for two years, but it is reversed now (my branch was closing and he chanced upon something that made a lot more money).

However, when you consider what was stated earlier in the post, about our generation trying to keep a family together, what this lady ultimately does about her new friend does make sense.

While in a perfect world we could all conduct opposite sex relationships without the SEX factor creeping in, for most, that's just not being realistic.

I can't speak for men, but women are really touched by connections of any kind and that can easily translate to physical desire. To pursue a real friendship with this guy, as connected as she was to him, could easily lead to sexual attraction for her. There were some male friends I kept when I married, long-distance, email ones, but one particular guy I had to let go. We had such an intellectual connection, he was my debate and philosophy partner, and really, the more he stimulated my mind, the more I was stimulated overall.

It didn't help that philosophising was not something my new husband enjoyed doing. We can talk about things, he's no dummy, but at the same time, he really could care less about debating anything that doesn't have a strict tie-in to his life. He's busy living life, not talking about it.

He is an awesome husband and we have one of the strongest marriages I know, but i couldn't have a go-for-coffee friendship with a man I connected on that seemingly platonic level. Instead, I read dialectic dad and other stuff that meets that particular need.

Connections are powerful. I've heard pastors urged not to pray privately with women in their congregation bc spiritual connections have been found to flower into sexual connections - i didn't think prayer was an aphrodisiac!

true, this woman cut it off instead of waiting until the possible problem arose and dealing with it, but I think it was a smart choice for her marriage. I might have swapped emails and then maybe tried to establish a couple friendship, with the four of us getting together, but it probably would have been a nice way to eventually play with fire. Over the years , I have seen many people verly confident about their fidelity and finding themselves in compromising situations as a result. They thought they were more mature than that, could handle it, etc., and then found that they were human after all.

Well, all you can do in instances like this is swap stories, feelings, and beliefs. Personally, this has never been a problem for us. I've always had close female friends, all my life, and for the entire 15 years of my relationship with my wife. And, likewise, she has had close male friends -- in fact, just today, while I was working, she went on a road trip with a divorced dad and our boys. Am I supposed to waste my life worrying that something might "happen"? Screw that. And if something did "happen," that's not the end of the world, as far as I'm concerned. Life goes on.