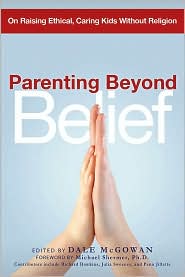 A few months ago, in a post entitled "Kids vs. Religion," I argued that kids don't need religion. Then a few weeks ago I was asked to take part in the Mother Talk blog book tour on the book Parenting Beyond Belief: On Raising Ethical, Caring Kids Without Religion, edited by Dale McGowan. The book looked interesting so I agreed.

The book has its good points, and the pieces in the anthology are all very readable. There are some useful suggestions, and a few thought-provoking pieces. But I have to say that overall, I was disappointed. And since the other reviews of the book on the blog book tour have all been pretty much positive, let me express some of the problems I had with the book.

First, on a positive note, a few of the chapters directly illustrate why it's so important for a strict separation between church and state, and for tolerance of all beliefs and disbeliefs. Most striking to me in this regard was the piece by Margaret Downey on the experiences of her child in different Boy Scout troops, where he was bullied into declaring a religion for his family. When they refused, he was expelled from troops less tolerant than the one he'd belonged to in New Jersey. This has certainly clarified for me why the Boy Scouts should not be receiving any kind of government assistance, including the use of public school facilities.

The book seems however to have several themes that strike me as problematic.

One of them is the strong fear expressed by a number of authors that children of nonbelievers will be "indoctrinated" into believing in God. This fear seems to be misplaced.

My wife and I are not believers, though we were both raised in religious traditions -- her family was Episcopalian, mine was Catholic. As I blogged before, for various reasons when the kids were little we nevertheless started going to the local Catholic church and sending them to Sunday school. Yet despite this, and although we did not present ourselves to them as nonbelievers, both of my kids have ended up as nonbelievers. The best indoctrination efforts of the Catholic church -- in my case seven years of Catholic school plus several more of religious ed -- failed to indoctrinate me or my children.

My point is that I don't think it is quite so easy to indoctrinate children into beliefs contrary to their parents' belief systems. The fear that children are so easily indoctrinated by outside forces seems overplayed. Even my mom, a very religious Catholic, sent two of my siblings off to Baptist summer day camp, secure in the knowledge that any "indoctrination" they received wouldn't really have much effect. And it didn't.

In my own case, not only did my Catholic schooling not produce a believer; my nonbelief was absolutely not the result of indoctrination -- where I grew up, there was no such thing as an atheist or even an agnostic. I just never believed all the stuff I was taught.

A second problem I see with the overall approach of the book is the degree to which the church model seems to be the one being emulated. Nontheistic congregations such as some Unitarian Univeralist (UU) churches are held up as a model. On the one hand, this is understandable. Church-going is one form of American sociability. Yet on the other hand, this seems forced.

Plenty of Americans, even religious ones, get along just fine without attending church services. At least 40 percent of Americans – including many believers -- never attend church, or go only once a year. In other developed countries, the figures for church attendance are drastically lower.

Given these numbers, it is clear that one can live a full life with social connections and have nothing to do with a church. So I am not sure why nontheistic writers feel the need to emulate Christianity by focusing on weekly services, especially since doing so reinforces the claim of religionists that religious communities are vital to being a full human being. This seems like a message we wouldn't want to send our children.

As I've written before, I do believe that for cultural reasons alone our kids need to be familiar with religion and religious texts, and even be comfortable in church services. And it's probably best to learn about religions from their believers; this is a problem I had with the UU Sunday school that my children briefly attended, where other religions were explained and described in ways that I can only describe as unintentionally condescending. This isn't addressed by the authors, many of whom would probably see believers providing information about their religions as endangering their children.

Finally, there seems to be a need among a number of the authors to establish a "free-thinking" identity. Again, this is perhaps an understandable reaction in a society where religious identity is often foregrounded. But it also seems, ironically, to put way too much emphasis on God, to define oneself with reference to a deity -- in this case denying that deity -- thereby reinforcing a theistic framing.

And one small additional point: the label "free-thinking" is so reminiscent of the all-too-many holier-than-thou (so to speak) upper middle class liberals who populate the region where I live, who, whether they realize it or not, exude a class-based elitism or snobbery.

Perhaps I am spoiled. I am raising my kids in a town in the Northeast USA where religion is not really an issue. Most of the people we know don't attend church, and many are probably nonbelievers. And none of it is a big deal. We don't discuss it, it's not part of our identities, it's just not really significant or relevant to our lives. Perhaps if one is living in a town surrounded by fundamentalists, where you are an embattled minority, this book will provide solace and even some ideas.

Overall though, I feel that unintentionally the book is reinforcing a religionist way of identifying and of seeing the world.

Thanks for that very thoughtful review, Chip. I think every one of those concerns is quite valid and you expressed them so clearly.

I especially struggle with ways to be nonreligious without (ironically) doing so in what contributor Emily Rosa called a "God-obsessed" way -- especially in my part of the country, which is indeed a bit more saturated.

Thanks Dale. I appreciate the time and effort it took to put this book together, especially given the number of contributors.

My response is very much my own personal reaction, and I understand that different people are in different places with this kind of thing. And I also know it's hard to step outside of a framework that has become so normalized.

As someone who grew up in the Midwest, I'm acutely aware of the dangers of too-loudly proclaiming "I don't believe in God." Especially when everyone else labels you Jewish because of a nose and last name.

At the same time, the atheists who choose to be vocal are too often condescending of those who believe. Or just downright mean.

As a result, I remain quietly hopeful that religious tolerance will expand in both directions so that my children -- who will learn about Judaism, atheism and other beliefs -- can choose their beliefs freely.

I haven't read the book yet, but I think the only piece of your review that I might take issue with is the question of indoctrination, and the vulnerability that children of nonbelievers may have to it. There is, of course, a big difference between preaching and teaching and leaving the hearer to do with the message what they will, and indoctrination, which is much stronger. There are plenty of people in religious institutions who believe it is very much their god-given right to force their beliefs on a child through the use of fear and emotional manipulation. Parents who are thoughtful enough to read a book like this most likely would be alert to such a thing and would protect their children from it, but others might not be.

t.h., I suppose some kids are more vulnerable. As I wrote, I was brought up in a religious home, went to Catholic school and church, etc etc., yet I never actually believed the stuff. I guess I find it hard to understand how people actually believe it. But clearly some people do. But I think that kids being raised by nonbelieving parents, who talk to their kids about this stuff, are more likely to be more skeptical.

On the other hand, if they do turn out to be believers, maybe it is because they have a need to believe, which it seems some people do. I'm not really sure.

Thanks for stopping by and commenting.

Interesting. What this makes me think of is hegemony; that the writers in this book who are unintentionally reinforcing a very christian structure maybe don't have an understanding of how pervasive and hegemonic christianity is; that it gets into everything and shapes some of our most basic assumptions. Too bad the book isn't all that, though; the title makes it sound fantastic.

Although, now that I think of it, implied in the title is an assumption that it is hard or odd or challenging to raise ethical, caring kids without religion.

sadie, yes, I had a similar reaction.

Chip, a couple of years ago I would have fully agreed with your position on the unimportance of indoctrination … until my complacency was shattered and I found out that WHERE you live DOES matter:

I grew up "spoiled": I was raised in a traditionally nontheist family, within a pretty sheltered social environment in which religion (or the lack of it) was simply not relevant to my identity. I am a non-reactive nontheist, or "untheist"…or agnostic/atheist/free-thinker... I never cared enough to find out which tag applied (which, upon reading Dawkins, makes me feel increasingly guilty and wimpy. I'm just not very confrontational on the subject, which may put me in the shameful TAP, or even PAP category! I'll have to start thinking hard about it, but that sort of defeats my position).

Anyway, ironically, my husband and I ended up in the bible-belt with our own young family. I felt dumbstruck, bombarded, and thoughts about religion were foremost in my mind in relation to my kid's social well-being and integration. I found out that Christianity has a monopoly over ethics and morality, so my children can't possibly know right from wrong... bless their souls...! (I apologize for the sarcasm, I guess I'm beginning to feel belligerent.)

Never having fought the battle, I lack the weapons. I never felt "different", so it bothers me that my children have to take a stance. My older son turned out to be very vulnerable to indoctrination, but in a reactive way: he is already a more ferocious atheist than I ever was, which makes me uneasy, since religion IS shaping his life and personality, and his vehemence does ruffle my true moral position, which is Tolerance (the one thing I can't tolerate is fanaticism.)