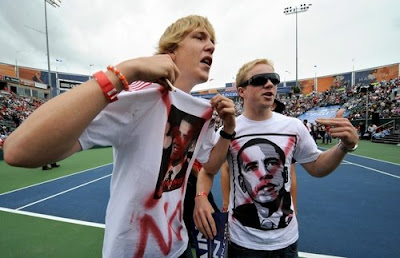 In Clearwater, arriving reporters were greeted with shouts and taunts by the crowd of about 3,000. Palin then went on to blame Katie Couric's questions for her "less-than-successful interview with kinda mainstream media." At that, Palin supporters turned on reporters in the press area, waving thunder sticks and shouting abuse. Others hurled obscenities at a camera crew. One Palin supporter shouted a racial epithet at an African American sound man for a network and told him, "Sit down, boy."

...Palin, speaking to a sea of "Palin Power" and "Sarahcuda" T-shirts, tried to link Obama to the 1960s Weather Underground. "One of his earliest supporters is a man named Bill Ayers," she said. ("Boooo!" said the crowd.) "And, according to the New York Times, he was a domestic terrorist and part of a group that, quote, 'launched a campaign of bombings that would target the Pentagon and our U.S. Capitol,' " she continued. ("Boooo!" the crowd repeated.)

"Kill him!" proposed one man in the audience.

And as the economy crashes, it's only going to get worse. People are starting to look for scapegoats. Brace yourselves.
Posted by Jeremy Adam Smith

This stuff makes me sick to my stomach. I'd like to believe that they don't really mean it, but they do. I'm hopeful, but also very scared.

Dude, this scares the crap out of me. I fear that a black president and lgbt marriage may just blow the gaskets of those(Palin wink)joe 6-packs. -jac

Thankfully McCain has made an attempt to temper the degree of seething anger pointed towards Obama.

Of course now McCain is playing the Comeback Kid... don't you have to WIN to claim a comeback?