Peeing in the Bath 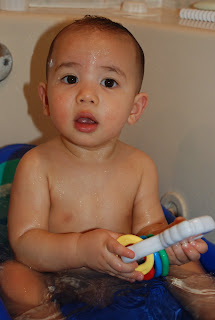 There is no story or plot, just an event: some happy splashing in the early evening, and then that perky little arc that emerges from the surface, rises, and falls back down again into the clear water with the little yellow duckies. I don't know why I think it's so cool that Spot pees in the bath. Maybe if I bathed more often, I would. It seems wonderfully life-affirming, a sign of riches, of male fecundity, and of Peter Greenaway's outrageous and mind-bending Shakespearean meditation, full of acrobatically pissing cherubs and called by some the worst movie of all time, Prospero's Books.

Because Spot pees in the bath, and because it makes me chuckle, and think about all the times I've gone skinny-dipping, peed on a mountain top or in the trackless reaches of some Canadian forest, it makes me wonder what sort of bond I would have if Spot were a girl. I have a script for Spot peeing in the bath. In this script, there is a long list of things I want to do with Spot, various places we can go to pee in the woods as he gets older. They are mostly replays of things I did, loved, and haven't been able to do much since, but they also include new things. A lot of them are boyish things. It's not the rupture in expectations and familiarity it would have been if Spot were a girl. There must be some equivalent for girls to peeing in the bath, but I confess I don't know what it is.

But oh, the freedom to splash and be free and not worry about what you should be wearing. Or having to frantically race through a foreign city looking for a culturally appropriate place to relieve yourself. I know some people who home-school their kids and live on a farm where the children run around naked. I suppose that's the logical extension of what I'm talking about. But I'd be satisfied with much less. A little skinny-dipping here and there, the unforgettable jump into the icy waters of Lake Superior, or marking a desert rock somewhere else.

Spot may turn out not to have the same childhood concerns that I had, doing my best to replenish the Midwestern prairie soils by peeing in the grass out under the astounding starry sky that enclosed my parents' backyard every evening. It's all part of the negotiated future that lies ahead of us, as he writes he own script, and I try to remember the lines from my own.

At the very least, I seem to remember, happily, that a few of those lines cue for "peeing in the bath."
Posted by chicago pop

I know your guilt. I, too, am inordinately proud about things I shouldn't probably be, including sneaking-a-cracker-when-daddy-isn't-looking, turning-the-cat-into-a-toy, and, of course, peeing-in-the-bath.

Umm, I think this post is the best reason for why you need to have a daughter next -- and get out of *your* comfort zone. It's time to start revving up your x-bearing sperm.

For the record, I'll just say that I have a certain relationship to the previous poster lpb (Spot's mom, my wife), who of course has her own take on all of this. But point taken. I'd like to think that some parts of my script could apply to either boys or girls, or that parts that seemed ambiguous could be pleasantly reactivated, and maybe even some new scenes added.

Well...here is where it is different being a mom with a boy peeing in the tub. I just took that as an excuse to show him that the toilet is the place to pee, not the tub. As soon as I saw the tell tale "fountain", I jerked him out of the bath and pointed him at the toilet. I have to say that when we did get around to actually potty training him, he was already aware of what he was supposed to be doing.