Nude on a Staircase 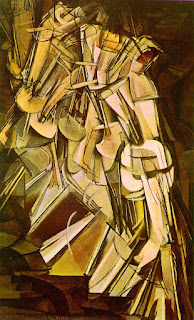 Coming home from work to find your wife nude in the living room is supposed to be one of the classic male heterosexual fantasies. So I naturally wondered if the reverse might be true when, at about 6:30 one evening, I stood naked at the top of the stairs as my wife came in the door below.

"What's with the nudity?" she asked.

Why the nudity? Was it not self-evident? Spot just had the barf of the century.

Which is why I was in the kitchen, at the top of the stairs, my clothes in a moist, warm pile beside the changing table upstairs, where I had managed to wipe down my son but not myself, before I decided that the only way I could then take a shower, without him crawling around and either destroying something or electrocuting himself, would be to hang his jumper chair in the kitchen below, and then put him in it. Which is what I was doing when my wife came home to find me naked at the top of the stairs.

All that, however, is incidental. The central part of this story is the trauma of being barfed on by someone you love, when there is nothing -- absolutely nothing -- that can be done about it. You just have to sit there and take it, letting your body and your clothes take the hit in order to save the sofa, the rug, and the baby. I've since learned, thanks to my wife's diligent researches, that the kind of power-barf I had just lived through may occasionally result from "over-feeding," something which I had thought was impossible with a baby.

Yet it would make sense. Spot was crying and I didn't know why. I sat him down in the rocking chair and offered him the bottle. He seemed more interested in holding it and turning it around, but I touched it to his lips, and he took it. But I still wasn't sure if he wanted it. Down went 6 ounces, easily enough, so I popped him onto his feet and stood him facing me on my lap. Well, what a happy baby!

The eruption that followed lasted for what seemed like 30 seconds, more than enough time for an earthquake to level a major city, and generated a solid stream of white liquid that poured onto my chest and lap. It looked like the pictures of milk splashing into a bowl of Cheerios or Corn Flakes on the side of a cereal box: solid, thick, and white, jumping dandily upwards on impact, together with a few dislodged strawberries. I happened to know, thanks to some friends of mine in the advertising industry, that those illustrations are an illusion, that they used Elmer's Glue because real milk wasn't white enough to really look like milk. But the way it bounced up off my lap sure looked like the way it bounces up on the side of a cereal box.

Spot barfed two more times that night, but that was by now my wife's problem. My more immediate concern, as I punched out at the end of my shift and took my shower, was whether whiskey or rum would be the more appropriate way to cure my headache and ring in the eventide. And whether or not I ought to put some clothes on.
Posted by chicago pop

What a terrific and funny post! Reminds me of the time I was lying on the floor in our living room, lifting my first born up in the air with my arms and bringing him down again quickly, and we were both laughing, and my mouth was wide open ... and he barfed a full load of warm breast milk straight into my mouth!

whiskey. rum is for when it's YOUR vomit.

yeah. here's my take on being covered in bodily fluids:

Ahh, the glamorous moments of our job, coulda been worse, she could have come in the door with a bunch of her girlfriends.

Now, that would have been sexy!

milehidad, now THAT'S a parenting fantasy I had not anticipated. But just wait, it could still happen.

ps: thanks for the link, Greg. I see we're dealing with universals here. I'll be checking in on hopeless cases to see what lies in ahead.

What, nothing coming out the other end?

That's a great story, and very nice to read about a guy who understands naked is natural. keep up the good work!